Our  Golden, Cooper has a friend named Pete. Cooper and Pete groom each other, take naps together on a favorite bed, and play their own special version of “wolf and caribou” around the dining room table. When Coop goes on walks, he likes to have Pete come along with us.

And oh yeah, Pete is our cat. 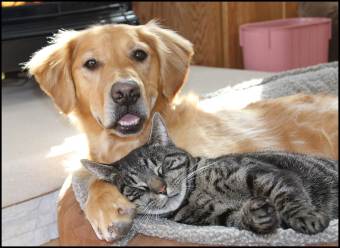 Many folks who live with dogs and cats are not surprised by this friendship and have great stories of their own to tell about a special bond between a dog and cat. However, the myth that dogs do not particularly like cats certainly continues to persist.

Likewise, it is generally accepted that not all cats are pleased about having to share their home with a dog.

The underlying foundation for the assumption that dogs and cats cannot be friends is perhaps the fact that they are vastly dissimilar species, with different evolutionary histories, social behaviors and communication patterns. Apparently, their interest in play varies as well.

Regardless, anecdotal evidence abounds about the ability of individuals from the two species to form close and enduring friendships. And, I found recently, there is even a bit of science to back up these stories.

The Study:  A group of investigators from Tel Aviv University in Israel interviewed 170 pet owners who lived with both a dog and a cat (1). The study also included direct observations of the pets in 45 of the homes.

Results: Not only do dogs and cats get along well, they also appear to be able to learn quite a bit about communicating with each other:

Take Away for Dog (and Cat) Folks: One of the most interesting results from this study had to do with the types of communication signals that were used by the dog and cat friends. More than 75 % of the greeting behaviors between these friends occurred in the form of a  “nose-touch”, which is considered to be a common feline-specific greeting pattern, rather than a canine-specific greeting signal. 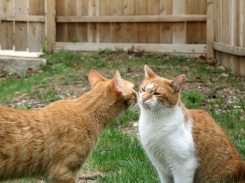 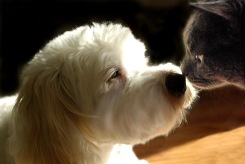 The researchers also reported several communication signals that had an unrelated or opposite meaning to the other species, yet were still correctly interpreted by the receiving animal.  Examples of these included lying on the back (submission or play in dogs versus aggression or predation in cats) and stretching out the forefeet (play in dogs versus aggression in cats). This is pretty cool stuff as it suggests that dogs and cats who share a home and become friends not only enjoy hanging out, playing, and resting together, but also appear to learn each others body language, even when certain signals may mean something very different in their own species.

As for Pete and Cooper, they both say, “Yeah? No big surprise there!” 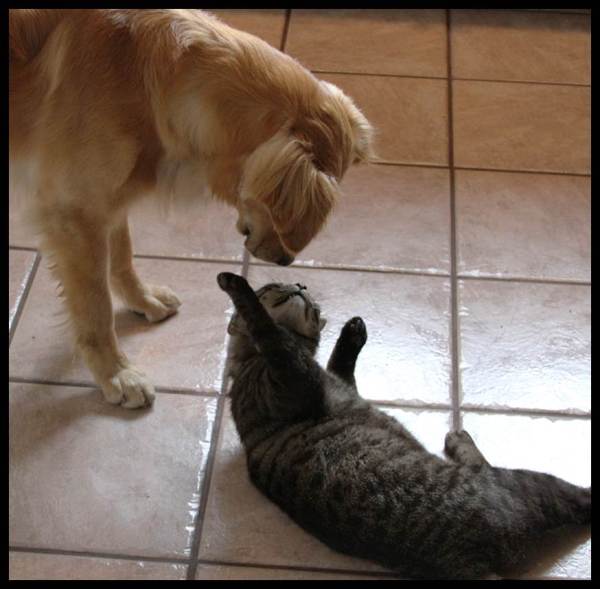 One thought on “Our Best Friends’ Friends”