This blog is about science.

Not to put too fine a point on this, but the name is, after all “The Science Dog“, not “The Anecdotes Dog.”

Early in this blog’s history, I wrote a series of essays that examined the principal underlying constructs of science (see The Steve Series). In a nutshell, the scientific method provides a framework for developing questions (hypotheses) and testing them in a way that minimizes bias and prevents erroneous conclusions. The steps of the scientific method assume the use of randomized, controlled trials (RCT). There are several other types of evidence that are considered part of science – these include expert opinions, clinical case reports, and case studies. However, while somewhat helpful as generators of new hypotheses, these types of evidence cannot be used as definitive support for cause and effect because they lack study design controls, impartial sample selection, randomization, and statistical testing.

In all science, (rocket and otherwise), the randomized controlled trial continues to be the accepted gold standard of scientifically acquired evidence (see Thyroid on Trial for more detail).

Why do I bring this up now, you may ask?

I wrote about diet and taurine status in dogs, and a potential link between these factors to the disease Dilated Cardiomyopathy, almost two years ago. That essay was published in response to the FDA warning letter addressing a presumed increased incidence of DCM in dogs and subsequently, the release of several letters and editorials suggesting a possible connection between canine DCM and grain-free dog foods. (See “The Heart of the Matter“). The Science Dog essay summarized the scientific evidence that was available at that time regarding taurine nutrition and health in dogs. Below is a graphic that summarizes factors that can influence taurine status and the development of DCM in dogs: 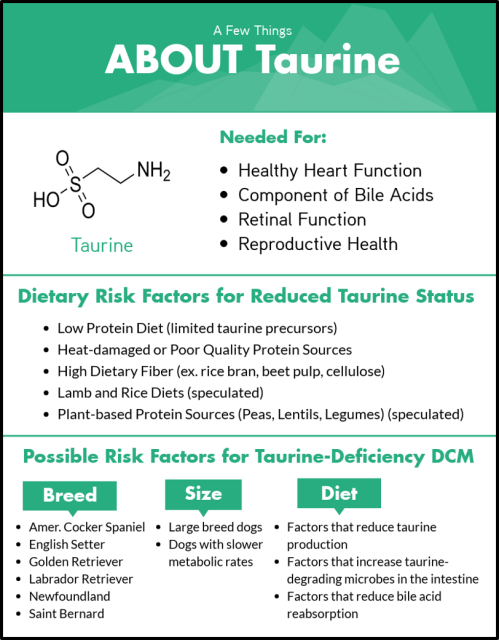 Since the release of that essay, I have laid low, waiting for the publication of randomized, controlled research trials in dogs that might provide new evidence about diet and taurine status in dogs.

That time has come.

In late January of 2020, a study conducted at the University of Illinois, by Dr. Kelly Swanson and his team of nutritionists was published in the Journal of Animal Science (1). Let’s take a look at what they did.

Background: From work conducted in both cats and dogs, we know that any dietary factor that: (1) reduces the availability of taurine or its precursors (methionine and cysteine) or (2) binds or degrades taurine bile salts in the intestine or (3) causes an increase in the bacteria populations that degrade taurine or bile salts in the intestine, has the potential to alter an animal’s taurine status. Compromised taurine status may ultimately lead to changes in heart function and development of DCM. (Note: There are other known causes of DCM in dogs that are not diet-related; most importantly, genetics).

Recently identified food-related factors that may play a role are legumes (such as peas) and tubers (such as potatoes), both of which are relatively recent additions to commercial pet foods. For example, another recent study of more than 16 different proteins that are used in pet foods examined the quality of both pea and potato protein, finding that they are both limiting in methionine and rated as moderate to low in protein quality (2). (See “Mind Your Peas and Potatoes“).

Additionally, pea and potatoes contain high concentrations of a class of fermentable fibers called oligosaccharides,. When included in foods, these fibers contribute to increased intestinal fermentation and select populations of gut bacteria. It is theorized that these changes may lead to increased degradation of taurine and/or higher losses of bile acids in the feces. Some dog foods (including both those that are grain-free and those that are not) contain relatively high levels of these new ingredients.

The Study: The objectives of the study were to compare the effects of feeding a grain-free (hereafter GF) dog food with a grain-based dog food (hereafter GB) to healthy adult dogs.  Both of the foods were formulated to be complete and balanced and differed only in the inclusion of peas and potatoes in the GF diet, which were added at the expense of grains. Both foods contained sufficient levels of protein, taurine, and sulfur amino acids (taurine precursors). The randomized controlled design included 12 adult Beagles who were fed each diet for a period of 4 weeks (see paper for complete study design details). Collected data included protein and diet digestibility and several measures of taurine status.

Conclusions: The authors conclude that collectively, the measures of health and taurine status used in this study indicate that taurine status in dogs was not influenced by the presence or absence of grains in the diet. To quote: “In our study, we demonstrated a complete and balanced taurine supplemented grain-free dog food did not result in lower concentrations of taurine in whole blood and plasma compared with a grain-based diet. There is still no scientific evidence showing that grain-free diets are a causative factor for DCM [emphasis mine]; however, there is a necessity to evaluate in depth the relationship between these two factors“.

Take Away for Dog Folks: I reported on this study because it is the first research study to be published that included randomized assignment to groups, the complete control of enrolled dogs’ diet, health, and living factors, and the study of two foods that differed only in whether or not they lacked grains and included peas and potatoes. Because of the RCT study design and the controls that were in place, conclusions about the effects of feeding a grain-free versus a grain-containing food can be made.

In previous work, Dr. Aldrich and his group found that pea and potato protein are low in the taurine precursor, methionine. This was not unexpected, but does provide some evidence regarding the potential for these ingredients to influence a dog’s taurine status. In the study reviewed here, Dr. Swanson’s group found that including peas and potatoes in a food did not directly influence a dog’s taurine status. However, the shift in bile acid excretion might contribute to an alteration in gut microbial populations, fermentation processes and possibly, over time, taurine homeostasis.

While it is important to emphasize that this study did not report any changes in taurine status in dogs fed the grain-free food, the potential for long-term effects of the bile acid shift on taurine status in a dog is noteworthy. It is possible that a shift of this type might be one of several different risk factors that must be in place for the development of taurine deficiency and DCM in an individual dog. Other factors that may be important (and need additional study) include genetic predispositions, large/giant adult size, presence of overweight conditions, and age. It is quite possible (if not probable) that several different risk factors must be in place for an individual to develop compromised taurine status and DCM.

Not Rocket Science: Randomized controlled trials provide the best type of original scientific evidence that we can get. The reason for this is that they are controlled, they vary only one or a few factors (in this case, a small handful of pet food ingredients), and they utilize protocols that are designed to limit bias. In order to answer important questions about a potential link between diet, taurine and DCM in dogs, we need RCTs and more of them.

Nutrition – it is not rocket science, but it IS science.

That is it from me on this topic, until the next RCT study is published. (Many thanks to the nutritionists who are doing this important work).

Interested in Learning More about Canine Nutrition? Take a Look at the new Science Dog Courses!

6 thoughts on “It’s Not Rocket Science….But, it IS Science”