At AutumnGold we have an informal group of trainers and dog friends who get together regularly to do a bit of dog training, go for group walks, and give our dogs free time to play. During play time, we take care that the dogs who are loose together know one another well, are  comfortable together and demonstrate good play manners. We include plenty of “calling out of play” and play pauses to keep things safe and tension free. One of the most enjoyable things about these sessions is that they give us a chance to watch our dogs having fun together and to observe the many ways in which dogs communicate during play.

And there are certainly a lot of ways. 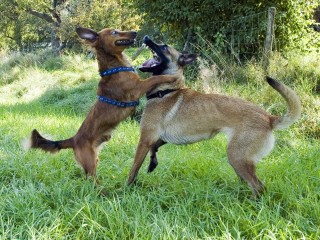 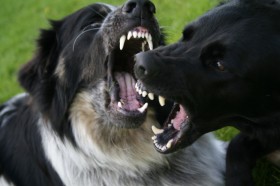 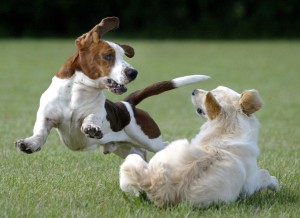 While many of us learn a great deal from watching our dogs play, there is also a substantial body of science on this topic. Researchers have long been interested in the expression and functions of animal play in a variety of species. Specific studies of play in dogs are not as numerous, but several scientists, such as Marc Bekoff, Nicola Rooney, John Bradshaw and Alexandra Horowitz have published work that examines play behavior in young and adult dogs.

Most recently, a team of researchers at the University of Michigan focused their work on a very specific component of canine play (1).

The play bow is a common and highly stereotyped play signal in dogs (and several other canid species as well). However, the precise meaning of this posture is not completely understood. Marc Bekoff’s earlier work with puppies and young adults suggested that dogs tend to bow prior to making a move that might be misconstrued by their play partner, such as feigning a bite or attack, as a way to clarify playful intent (2). In other words, the play bow is analogous to a dog saying “Hey, dude. Just wanted to remind you that this is all play. I just mention this because the next thing that I plan to do is well…..bite your ear. Remember this is all play, ‘kay?” Other possible functions of play bows are as visual signals to reinitiate play after one or both of the play partners have paused, as strategic moves that allow a dog to position himself ready to either pounce upon or dodge his play partner, or, because play bows are often offered simultaneously, as a way to synchronise play behavior. 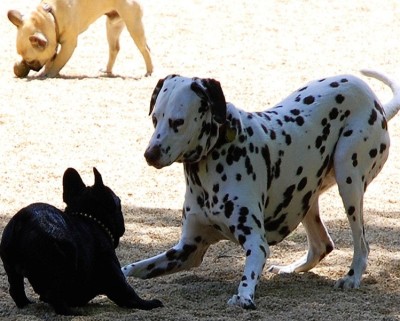 The Study: Because it is quite possible that play bows are highly flexible signals and may have multiple functions, the researchers searched for evidence for all of the aforementioned possibilities. They presented four hypotheses regarding the function of the play bow: to clarify play intentions, to reinitiate play after a pause, to position oneself for escape or attack, or to synchronize play behaviors. They also studied the role of the play bow as a distinctly visual signal, which if true, would mean that play bows are only offered when a dog is within the visual field of his or her play partner.

The team analyzed a set of videotaped play sessions of 16 dogs playing as pairs. The dogs were playing in large enclosed backyards or a public area. All of the dogs were well socialized, played well together, and varied in their degree of familiarity with one another. Some had just recently met while others were well-acquainted friends. Play behaviors were coded according to a previously developed ethogram of adult dog behavior and were independently recorded by three reviewers. The number of play bows, their context, and each dog’s behavior before, during and after play bows were recorded. Results: A total of 414 play bows occurred during 22 separate play sessions. Four play pairs were responsible for the majority of the play bows (76 %). By comparison, no other pair accounted for more than 5 percent of total bows, suggesting that play bows vary dramatically among individuals and play pairs. There was no indication of an influence of age, sex or size influencing the number or form of play bows. However, this may be due to the relatively small sample size and are factors that could be examined in future work.

The collected data suggested the following regarding the function of play bowing for adult dogs during play:

For dog folks, play bows are a welcome sight during paired or group play among adult dogs because we seem to intuitively grasp their use as a non-threatening and friendly signal. This new research, coupled with the earlier work of Marc Bekoff, suggests that bowing during play is not a random event that is just part of play, but rather that it is used to communicate specific information. For adults, this seems to be an invitation to continue play –  “Hey pal, let’s start playing again!” – as well as perhaps a way to coordinate and synchronize movement “Okay Charlie, let’s bow together and when I say GO, you shall zig and I shall zag”. And for young dogs and perhaps some adults, it may also serve to clarify playful intent.

An additional important piece of information from this work is that play bows may be highly individual. Just a few pairs in the study used multiple bows and a single dog, Tex, apparently was bowing all over the place. I bet many of you are nodding right now. Because anecdotally, many of us have seen this in our own dogs or in dogs we work with. In the play group at my school, Colbie, a young Pit Bull, is a champion play-bower. She offers not only multiple play bows during paired and group play sessions, but she offers them at record speed, seemingly as an invitation to chase. My five-year-old Golden, Cooper, also bows during play, but (again anecdotal here), he seems to bow most frequently when he plays with dogs who he knows well such as his housemates, and is less likely to play bow during group play.

Ally, on the other hand, prefers to chase and to be chased. 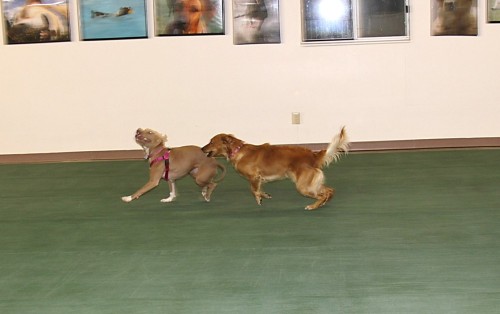 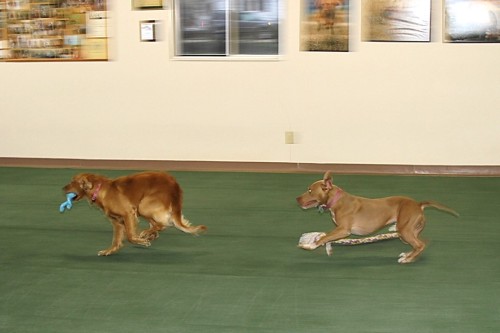 Like all good research, this new study stimulates thought and additional questions to ask about the play bow. For example, what factors might influence a dog’s frequent use of the bow – is it age, personality traits such as level of confidence or degree of playfulness, degree of familiarity among the dogs? Are there possibly learned components, such as training the play bow on cue? Does the use of a play bow ever “end badly”? In other words, do some dogs misinterpret this ubiquitous signal?

Lots to learn, and I am looking forward to seeing more from this team of researchers. Until then, play on, dogs, play on. 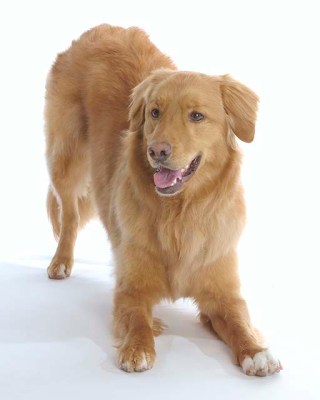 CHIPPY’S PLAY BOW IS TRAINED – DOES THIS AFFECT HIS SPONTANEOUS PLAY BEHAVIOR? 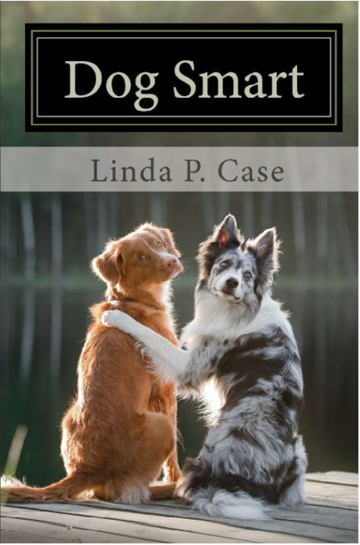